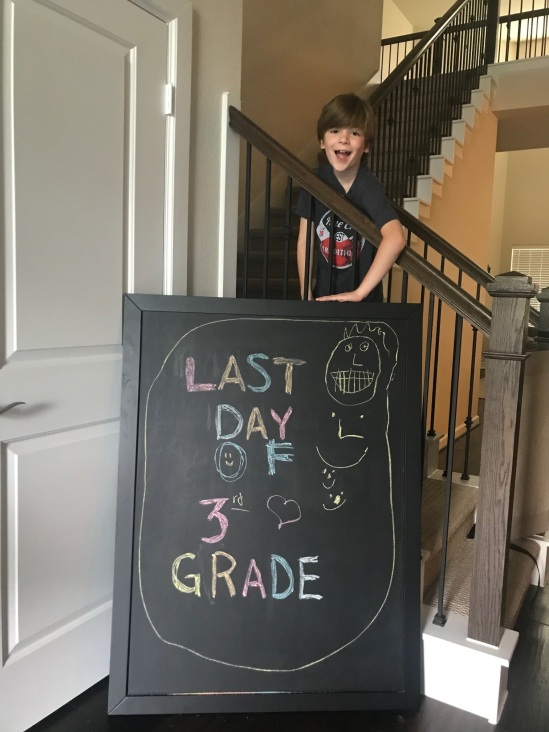 One of my favorite moments in the last 2+ years of our dyslexia journey, happened recently at the end of the year celebration at my son’s school.

A quick back step if you’ve not read my other blog posts.

The upside for us with the mid-year evals by Lindamood-Bell is that since they were the first ones to test our son at the very beginning of our journey, and they measured two more times during their 180 hours working with him, and then have two mid-year evaluations, we have an enormous amount of data which is amazing!  We can literally measure his growth and where our interventions are working, what crutches are developing and where he still needs targeted intervention.

After our March 2nd evaluation this year, I have to admit, I have a lot of fear for the 4th grade.  We read a lot about the 3rd grade wall and that’s an undeniable reality for a lot of people.  Well, our son didn’t hit that wall because I think his wall will be in the 4th grade and I’m afraid of how hard he’s going to slam into it.

So I was sharing this little fear of mine with his teacher at the end of year celebration.  She listened to what I had to say, then she added “I wouldn’t worry about it at all.  We’ve developed so many safety nets for him in the second half of this school year, and he’s really doing so much better and has so much more confidence, that I think he’ll be just fine.”

Please note the statement, “the second half of the school year….”

Now look back to my bullets above, specifically, “January 2018 we successfully converted our son to an IEP.”

Now I actually like this teacher.  She’s the first teacher my son has had that I genuinely liked and truly felt that she was in his corner and truly wanted what was in my son’s best interest.  She’s dyslexic herself and while I had a lot of people scared for me that things would go badly because she was dyslexic, this has been a great year for him and that’s in large part to her because of her.

So as I chocked down the indignant laughter trying to escape my throat and say what I WANTED to say which was, “Oh really?!  You mean since I actually FORCED the school to follow the LAW and put into place what he was LEGALLY ENTITLED TO ALL THIS TIME, now he’s thriving and the reports are so good NO ONE CAN DENY IT????!!!!”  But, because I genuinely like her, my salty dyslexia dog side didn’t take over.  I kicked that smart-alack side of me to the corner, smiled sweetly, nodded in agreement, thanked her for her efforts and support and moved on.

She has no idea the compliment she gave me or the indictment of “we don’t deal with dyslexia under an IEP” that her simple statement provided.  I felt proud in that moment that I fought for this, because it’s working.

In the few weeks that have followed since, I look back on this moment with a warm heart and a big smile.  Thank you, Ms. M.  I wish you could be my son’s teacher each and every year, though I’m sure you’re glad to be rid of me.